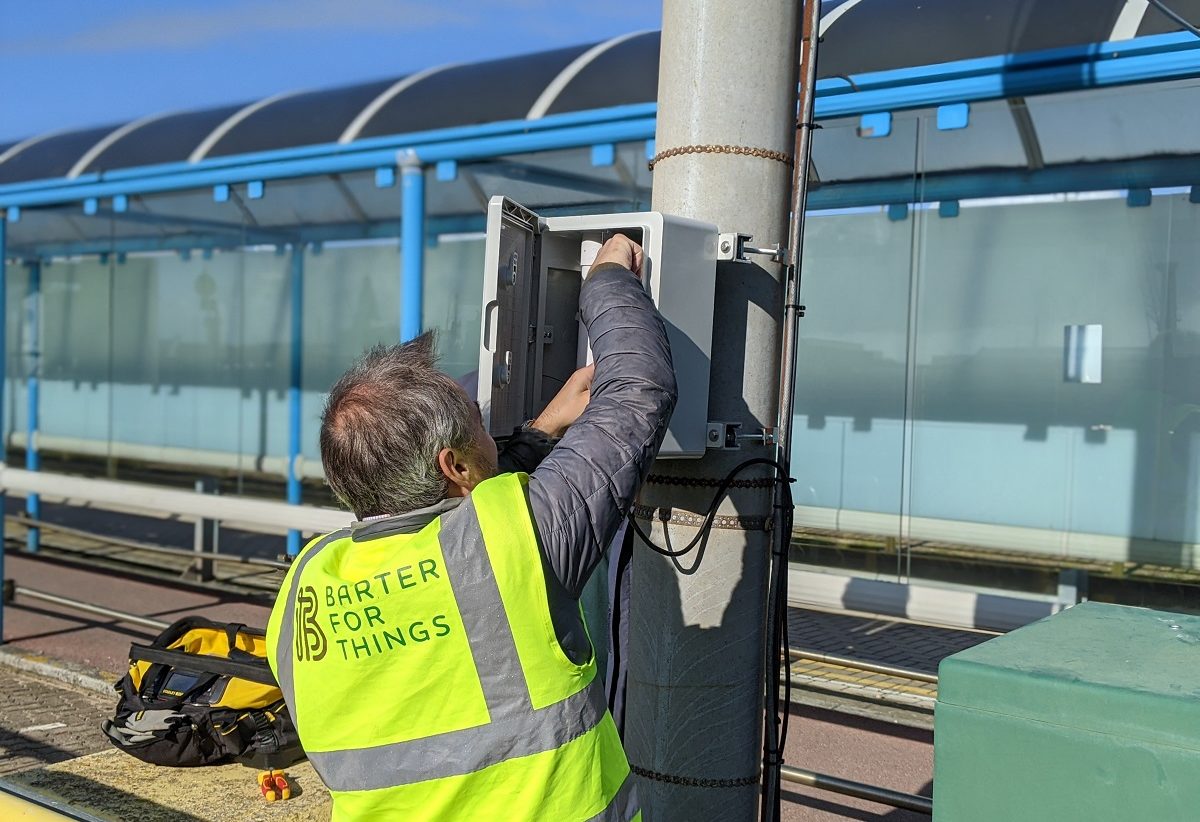 Portsmouth international port began operating in 1976. In the decades following, the port owned by Portsmouth City Council has developed exponentially into Britain’s best-connected port, boasting more destinations than any other port in the UK.

To provide Portsmouth International Port with an IoT enabled solution, that allows them to measure the environmental impact of operation within their port using air pollution sensors.

Barter for Thing’s IoT-enabled solution uses a ‘Smart-Box’ device connected to the WNDUK 0G Network, powered by Sigfox, to monitor the levels of air pollution within the port, cross examining this information with the scheduled shipping information and local weather. The solution derives of:

Portsmouth International Port is the best-connected port within Great Britain, with an extensive scope of ferry routes and a progressively popular location for cruise ships. Aside from its ferry’s, cruise ships and facilities, Portsmouth International Port plays a crucial role in the importation of fresh fruit and vegetables, with over 70% of the bananas eaten in the UK coming through the port.

With climate change becoming a growing issue within society, Portsmouth International Port have pledged to improve their air quality and reduce their carbon footprint as part of their aspiration to become one of the UK’s first zero emission ports. Previously investing £16.5m in 2011 in a new terminal described as one of the most environmentally friendly buildings in the UK, which is heated by thermal sea energy and cooled by the coastal winds.

Barter for Things (B4T) are Internet of Things specialists, based in Hampshire. B4T are working alongside Portsmouth International Port on a project as part of the port’s campaign to reduce their carbon emissions and increase local air quality.

Jerry Clarke, Senior Project Manager and Assistant Harbour Master at Portsmouth International Port said: “The port is owned by the people of Portsmouth, so we have a greater duty than any other port to control and reduce the impact of port operations on the local environment and our neighbours”

“This initiative has the potential to provide significant information to the port on the effect of port operations and will blaze a trial for air quality transparency across the maritime sector. We’re delighted to work with B4T on this low cost, long term solution for air quality monitoring at the port”.

Easily camouflaged with common electrical lamppost boxes, B4T’s ‘smart box’ cuts above the rest and has been custom made for a marine environment. Scanning air particles and determining its pollution levels, the ‘smart box’ cross references this information with local weather data and the ports shipping schedule to provide an image of the environmental impact the port’s operations are having.

The data from the ‘smart box’ will allow for Portsmouth International Port to make informed decisions when deciding upon their future operations, allowing them to continue to reduce the environmental impact that its operations have on local and surrounding areas. The smart boxes are able to communicate by using a low-power wide-area network (LPWAN) supplied by WND UK, meaning that the solution doesn’t require any additional infrastructure to commence data collection, solely a basic power supply.

Upon reflection of this project, Alex Barter, Managing Director of Barter for Things, stated that: “This project with our Solent neighbours Portsmouth International Port, reminds me of why B4T does what it does. With clients who really care about and commit to a positive impact on the environment, we are making our mark in our own little way, with IoT technology that we are so passionate about”.

The first of the ‘smart boxes’ has already been installed at the port for a period of testing, soon to be followed by a further 4 boxes being installed in other areas of the port. Each box senses the levels of nitric oxide, nitrogen dioxide, sulphur dioxide and carbon dioxide within the air, whilst additionally fine particle sensing for PM2.5 and MP10 sized particle matter.

With a rich maritime heritage, Portsmouth has been known for it’s naval links and ocean-going trade for centuries. With that in mind, it might surprise many that Portsmouth International Port, formerly known as the commercial or continental ferry port, has only been in operation since 1976. Owned and operated by Portsmouth City Council, the port has grown extensively over the decades. Initially it offered just one route to France from a small section of reclaimed harbour front. It is now known as Britain’s best-connected port, with more destinations than any other UK port. Learn more: https://www.portsmouth-port.co.uk/about-us

About Barter for Things (B4T)

B4T is an environmental technology company leveraging “internet-of-things” technology to solve carbon and opex reduction in Water Utilities, Port Logistics and Horticulture. B4T are unique in providing the full IoT stack of homegrown sensors such as Jellyfish, 0G services and analytics software.

WND UK’s growing ecosystem of channel partners operate across a broad range of industry sectors providing a range of applications, such as the monitoring of legionella in healthcare and public sector buildings, automated meter readings for utilities, property technology, leak detection and asset management within logistical, returnable packaging and post and parcel sectors. Learn more: https://www.wndgroup.io/iot-tech-overview/

LoRa vs NB-IoT vs Sigfox